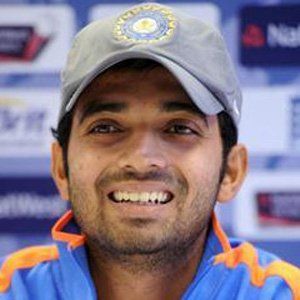 Right-handed batsman for India starting in 2011 who also played for the Mumbai Indians and Rajasthan Royals in Ranji Trophy.

He began his cricket career at a small academy in Dombivli.

He averaged an incredible 62.04 after 100 first-class innings in his rookie first-class season.

He married Radhika Dhopavkar in 2014. He credits his parents for supporting him throughout his career, even when the going was tough.

He has played for the Mumbai Indians like team captain Harbhajan Singh.

Ajinkya Rahane Is A Member Of