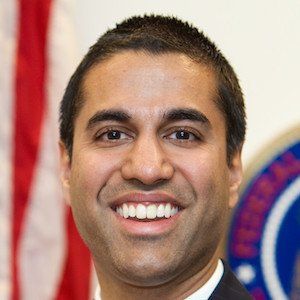 Former American attorney who serves as the Chairman of the United States Federal Communications Commission. He is best known for being a proponent of repealing net neutrality in the U.S. He has also held positions within the Department of Justice, the U.S. Senate, and the FCC's Office of General Counsel.

Heattended Harvard University where he graduated with a B.A. He later attended the University of Chicago Law School.

He is known for being the first Indian American to hold the office of the FCC. In addition, he is also known for winning the Thomas J. Mulroy Prize upon graduating from University of Chicago Law School. Since 2012, he has been an appointed member of the FCC.

Since 2010, he has been married to his wife Janine Van Lancker. He was born in Buffalo, New York but grew up in Parsons, Kansas. Immigrants from India, his father Varadaraj was a urologist and his mother Rasha was an anesthesiologist.

There has been criticism for his decision to repeal net neutrality by a variety of celebrities including Mark Hamill, and Baauer.

Ajit Pai Is A Member Of