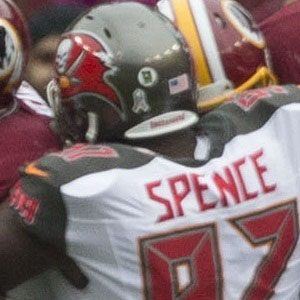 Defensive tackle recorded 29 tackles his rookie season after being drafted 100th overall by the Buccaneers in 2013.

He won a scholarship to the University of Illinois after turning heads with an 80-tackle and five sack senior performance at Fort Walton beach High School.

He dominated the defensive line at Illinois with 72 tackles and 7 sacks, leading to his decision to chose the NFL over his senior season.

His father, Floyd, was born in Jamaica.

He was coached by Greg Schiano during his rookie season with the Tampa Bay Buccaneers.

Akeem Spence Is A Member Of