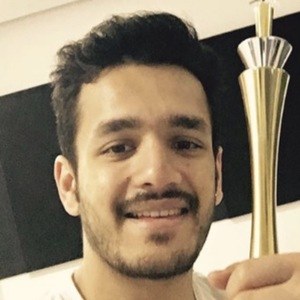 Actor who is known for his time working in the Indian Telegu film industry. He made his acting debut as an infant at age 1 in the film, Sisindri, released in 1995. It served as the Telegu adaptation of the American film, Baby's Day Out.

At age 16, he chose to pursue acting as his full-time profession. He enrolled at the Lee Strasberg Theatre in Film Institute in New York City to do so. He has also made various appearances as a member of his father's cricket team, doing so for the first time in 2010.

In November 2015, he starred in the action film Akhil: The Power of Jua, which was named after him. He spent two months undergoing extensive stunt training in late 2014 and into 2015.

He appeared in commercials for various internationally renown brands with Kalki Koechlin.

Akhil Akhineni Is A Member Of