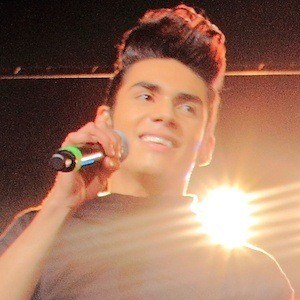 Famous for his membership in the Mexican boy band CD9, he contributed to the group's self-titled, chart-topping debut album and to the hit singles "You" and "I Was Wrong." In 2014, he and his bandmates received both a Mexican Kids' Choice Award and an MTV Millennial Award.

His first EP with CD9, The Party / Angel Cruel, was released in March of 2014 and quickly rose to number 9 on Mexican music charts. CD9's follow-up EP, Step 2, peaked at number two following its June 2014 release.

On October 10, 2014, Navarro and his bandmates launched their Party Tour, performing first in Mexico City and later traveling to Guadalajara, Puebla, Acapulco, Veracruz, and numerous other Mexican cities.

He and his cousin Freddy Levya both rose to fame as members of CD9.

Formed in 2013 by Jos Canela, CD9 grew to include a band "family" comprised of -- in addition to Navarro and Levya -- Alonso Villalpando, Bryan Mouque, and William Valdes.

Alan Navarro Is A Member Of