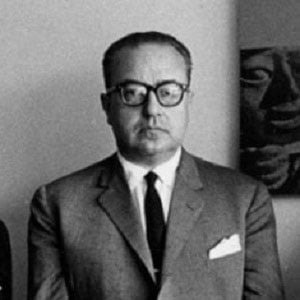 Considered one of the great South American classical composers of the twentieth century, Ginastera wrote opera, ballet, choral, and chamber music, as well as film music and works for piano and organ. His works include Cantata para America Magica (1960), Beatrix Cenci (1971), and Danzas Argentinas (1937).

In his early twenties, he trained at a music conservatory in his native Argentina and went on to teach music at the Liceo Militar General San Martin.

Members of the English rock band Emerson, Lake & Palmer adapted a portion of one of Ginastera's piano concertos into a track on their 1973 album Brain Salad Surgery.

A member of a family of Catalan and Italian heritage, he grew up in Buenos Aires, Argentina. He later lived and worked in both the United States and Europe; he died in Switzerland in his late sixties.

During the mid-1940s, he studied with the renowned American composer Aaron Copland .

Alberto Ginastera Is A Member Of