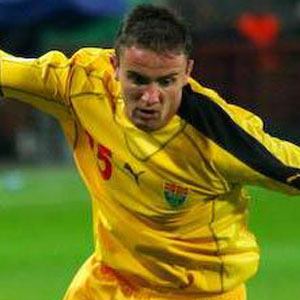 Centre back defender for the German football club, Eintracht Frankfurt, from 2005-2011.

He began his career by playing for two Macedonian football clubs.

His knee injuries forced him to consider an early retirement in 2011, but he opted to keep playing soccer for a while longer.

His family lived in the city of Skopje at the time of his birth, and he later coached his hometown's youth soccer team.

He was born in the same year as Hungarian footballer, Miklos Feher, who died tragically during a 2004 soccer match.

Aleksandar Vasoski Is A Member Of