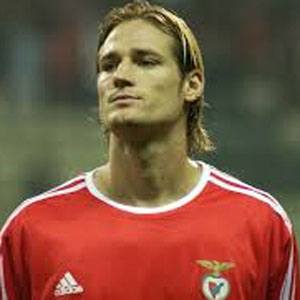 Hungarian striker who died of cardiac arrest during a match in 2004 when his Benfica team was playing Vitoria de Guimaraes. He was a member of the Hungarian national team from 1998 to 2004.

He began his career playing for Gyori ETO FC in 1995.

He scored a hat trick against Lithuania in the 2002 World Cup qualifiers.

His family was known for their restaurant in Gyor, where they created a room dedicated to Miklos' memory. He had a sister, Orsolya.

He wasn't the only beloved athlete to die while playing the game they loved. "Pistol" Pete Maravich died of heart failure while playing a pick-up basketball game.

Miklos Feher Is A Member Of