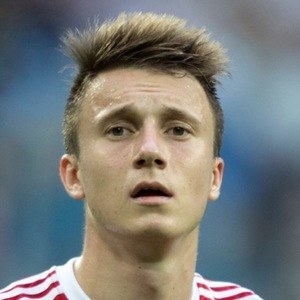 Midfielder who has represented Russia at tournaments like UEFA Euro, the FIFA Confederations Cup and the FIFA World Cup. He made his senior club debut with CSKA Moscow in 2014.

He was raised in the Russian town of Kaltan.

He won the 2015-16 Russian Premier League title with CSKA Moscow.

His father was a miner and his mother was an accountant.

He was teammates with goalkeeper Igor Akinfeev at the 2018 FIFA World Cup.

Aleksandr Golovin Is A Member Of