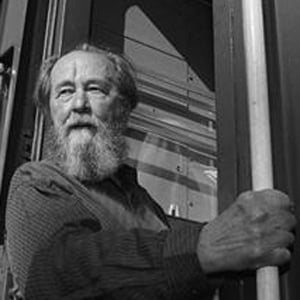 Russian historian, novelist, and social critic whose most famous works include The Gulag Archipelago, Two Hundred Years Together, and One Day in the Life of Ivan Denisovich. His literary work exposed the evils of the Soviet Gulag's forced labor camp system to an international audience.

He attended Rostov State University, where he studied mathematics. He went on to serve in the Red Army during World War II. From the mid-1940s through the early 1950s, he was imprisoned in Russian labor camps for his private criticism of Stalin (discovered when government officials confiscated his letters to a friend).

He won the Nobel Prize for Literature in 1970 for One Day in the Life of Ivan Denisovich. The same work was responsible for his exile from the Soviet Union in 1974.

He married his first wife, Natalia Alekseevna Reshetovskaya, prior to his Gulag sentence. He later wed Natalia Dmitrievna Svetlova. He had three sons, Ignat, Yermolai and Stepan.

He and T.S. Eliot were both recipients of the Nobel Prize for Literature.

Aleksandr Solzhenitsyn Is A Member Of