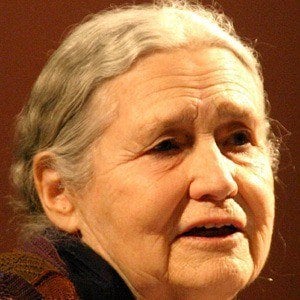 Known for such novels as The Grass is Singing and The Golden Notebook, she was awarded the Nobel Prize in Literature in 2007. Her other notable works include The Good Terrorist, The Fifth Child, and The Sweetest Dream.

After studying at the Dominican Convent School in Zimbabwe, she left home at the age of fifteen to work as a maid and nurse.

She was ranked fifth on The Times' 2008 list of the Fifty Greatest British Writers Since 1945.

She was born in Iran, and she spent much of her childhood in Zimbabwe. She later moved to England and was married to Frank Charles Wisdom from 1939 until 1943.

She won the Nobel Prize for Literature two years before Herta Muller received the same honor.

Doris Lessing Is A Member Of