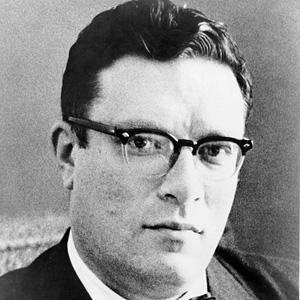 Prolific Russian-American author of science fiction works, including The Foundation series, The Robot series, The Bicentennial Man, and I, Robot. He is considered part of The Golden Age of Science Fiction.

He became enthused with science fiction novels as a boy, although his father considered them trash. He studied zoology and chemistry through Columbia University's extension program and eventually received his Ph.D. in biochemistry. His degree allowed him to secure a position on the medical faculty at Boston University.

He won the 1957 Thomas Alva Edison Foundation Award for his work, Building Blocks of the Universe.

He was born in Russia to a Jewish family; he and his parents immigrated to the United States when he was a young boy. He married Gertrude Blugerman in 1942 and wed Janet Jeppson two weeks after his 1973 divorce from Blugerman.

Will Smith starred in the film adaptation of Asimov's science fiction novel, I, Robot.

Isaac Asimov Is A Member Of