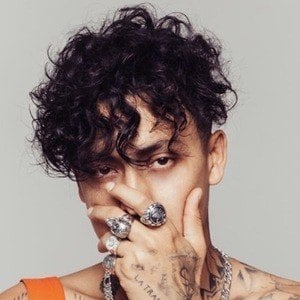 Mexican hip-hop recording artist who is recognized for the popular singles "La Doble Rimaldita," "Rap Phenomenon" and "Por el Pacífico." He has gone on to garner more than 3.9 million followers on his mxalemanmx Instagram account. He has released over 5 albums since 2015.

He began his rap career by forming a duo known as 2 Rhymes with a friend.

He has performed live in a number of Mexican cities including Guadalajara, Los Cabos, and La Paz. He collaborated with Kidd Keo on the track "Touchdown," which hit the 70 million views mark on YouTube a year after its release.

His full name is Erick Raúl Alemán Ramírez. He is from Cabo San Lucas, Mexico.

In 2019, he was photographed alongside Anitta, Paulo Londra, Cazzu and Rauw Alejandro at the Latin Grammys.

Alemán Is A Member Of