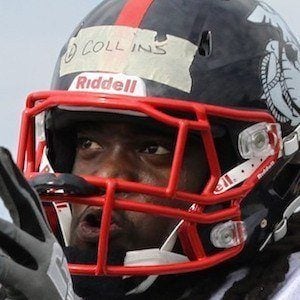 Known for his collegiate playing career for the Arkansas Razorbacks football team. During his junior 2015 season, he set the school record for most touchdowns in a season with 20.

He was ranked as a 4 star high school recruit by the site Rivals.com. He also ran track in high school, and won a state championship as a member of his school's 4x100 relay team.

During his freshman season at the University of Arkansas, he became the first true freshman in SEC history to run for over 300 years in his 1st 3 games. In 2016, he was named the Liberty Bowl MVP.

He was born and raised in Fort Lauderdale, Florida.

As a student-athlete at the University of Arkansas, he has played for the Razorbacks' head coach Bret Bielema.

Alex Collins Is A Member Of