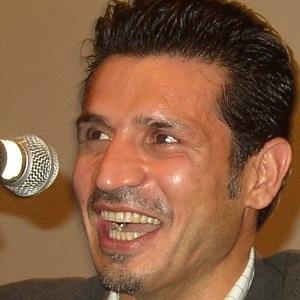 Forward who set the all-time record for goals scored with the Iranian national team with 109 in 149 appearances from 1993 to 2006.

He played for his hometown club, Esteqlal Ardabil, before moving to Tehran to continue his career.

He kept his place with the Iranian national team in the 2006 World Cup, despite criticism from the media that, at age 37, he was too unfit and should retire.

He met his future wife at Sharif University; unauthorized photographs of their lavish wedding caused controversy in Iran.

He and Egyptian soccer star Mohamed Aboutrika transcended the sport to become celebrities in their home countries.

Ali Daei Is A Member Of