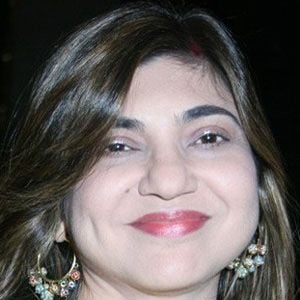 Bollywood, filmi, and playback singer who has been awarded the National Film Award on more than one occasion. She has also won numerous Filmfare Awards for Best Female Playback Singer.

She started singing for All India Radio when she was only six years-old.

She has several songs featured in the BBC list of Top 40 Bollywood Soundtracks of all time.

She was born in Kolkata, West Bengal. She married Neeraj Kapoor in 1989.

She and Asha Bhosle are two of the most active and successful Bollywood singers of all-time.

Alka Yagnik Is A Member Of