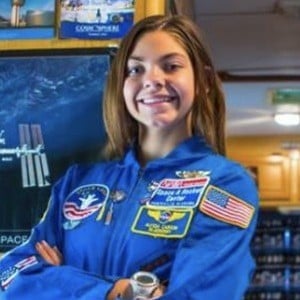 Astronaut trainee within Project Possum, an astronautics research and education program studying upper-atmosphere and its role in global climate.

She first went to space camp at age 7, in Huntsville, Alabama. She went on to return 18 times.

In 2012 and 2013, she attended Space Camp Turkey and Space Camp Canada, becoming the first person to attend all three NASA Space Camps.

She credits her father, Bert Carson, for helping her support her dreams while also keeping her grounded.

She met NASA astronaut Sandra Magnus when she was nine years old.

Alyssa Carson Is A Member Of