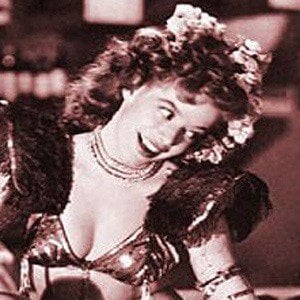 Cuban and Mexican film actress and dancer who became an icon of the Rumberas film movement.

Her dancing in Mexico City's Teatro Lirico captured the eyes of filmmakers, and she made her big-screen debut in 1945's Pervertida.

She received the Mexican Silver Ariel in 2006 for her distinguished career.

She and her sister Cecilia formed a traveling Cuban dance show, billing themselves as "The Aguilar Sisters."

She began working at Joe DiMaggio's night club in 1947, where she appeared alongside Bob Hope, Carmen Miranda, and many other stars of the era.

Amalia Aguilar Is A Member Of