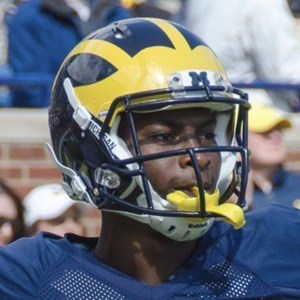 Wide receiver who has gained fame for his NFL career, including for the Seattle Seahawks. He debuted for the squad in 2017 after being taken by them in the third round of that year's NFL Draft.

He escaped the Sierra Leone Civil War with his siblings in the early 1990s. He was taken in by the Schafer family in Iowa.

He was named to the second team All-Big Ten playing for the Michigan Wolverines in 2016.

His parents were killed in his native Sierra Leone when he was two years old.

He has played alongside Russell Wilson for the NFL's Seattle Seahawks.

Amara Darboh Is A Member Of