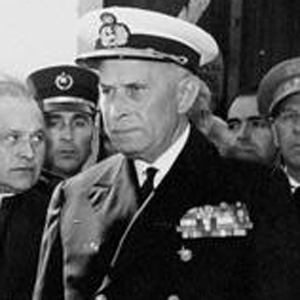 Admiral and career politician who was the 13th President of Portugal from 1958 to 1974, when he was deposed by the Carnation Revolution. He lived in exile in Brazil for six years until he was allowed to return to his native Portugal.

He went to the Faculty of Sciences and enlisted in the Naval Academy as a midshipman.

He was elected president of Portugal under questionable pretenses but was seen as a figurehead being controlled by Prime Minister António Salazar.

He married Gertrudes Ribeiro da Costa in 1922, and they raised two children together.

Both he and Roberto Ivens were involved with the Portuguese Navy.

Américo Tomás Is A Member Of