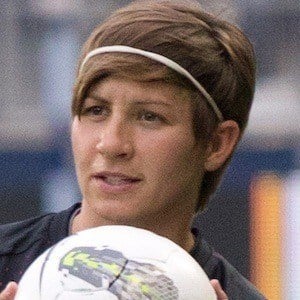 Former international soccer defender who won a gold medal at the 2012 Olympic Games as a member of the US Women's National Team. She was also a member of the 2011 team that finished second at the FIFA Women's World Cup.

After starring in both basketball and soccer in high school, she played soccer at Arizona State University. She was twice named an All-American and Academic All-American.

During her professional career she played for the Boston Breakers, Chicago Red Stars, and FC Kansas City, among other teams.

She was born to Lynn and Andy LePeilbet and grew up with four siblings.

She and Christie Rampone played together on the US national team.

Amy LePeilbet Is A Member Of