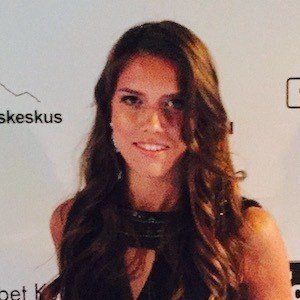 Estonian motorcycle road racer who is best known for holding the title of the best female motorcycle athlete of the year in Estonia for multiple years in a row.

She made her international road racing debut in 2012 where she raced on a Kawasaki Ninja 250R. Prior to her racing and while she continued in her career, she also studied at Tallinn French School. She then received her bachelor's degree in Law at the University of Tartu. In 2013, she acquired her BA degree and on the same year went on to acquire her master's degree in Law in University of Tartu all while still racing.

She is the first female racer in Estonian road racing history to race on the international level.

Kovalenko was born in Tallinn, Estonia. She is the oldest of four children, having two younger brothers and one younger sister.

As a motorcycle racer that competes at an international level, she can be seen in relation to other racers including Angel Nieto, Valentino Rossi, and Mike Hailwood.

Anastassia Kovalenko Is A Member Of