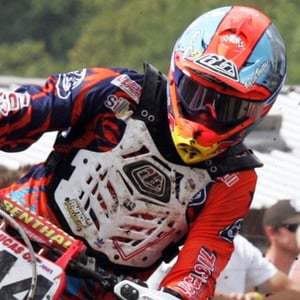 Motocross rider who is known for his career in the Lucas Oil Pro Motocross Championship. In July 2015, he became a full-time rider for the GEICO Honda racing team for 2016.

He began his career in 2009 with the Lucas Oil/Honda factory team. During his debut season, he broke his back, and underwent an 11-hour surgery to repair it.

He announced his retirement from motocross racing in 2013. Following time away, however, he recommitted, and was soon after signed by the GEICO Honda team after a slot opened for a full-time racer.

He married Paige Craig and they have two children named Jagger and Lennon.

He has raced against Marvin Musquin in the 250 class division of the Pro Motocross Championship.

Christian Craig Is A Member Of