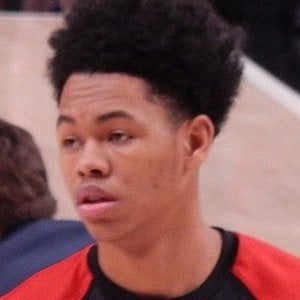 6'4" guard who was a first-round pick of the Portland Trail Blazers in 2018. In 2019, he briefly played for the Agua Caliente Clippers. He won the 2021 NBA Slam Dunk Contest.

He first began earning recognition for his playing during high school when he played for Edgewater High School in Orlando. He then competed in a post graduate season for IMG Academy in Bradenton, Florida. In 2017, he began playing for the United States men's national under 19 team and bypassed college to enter the 2018 NBA Draft.

He is known for being the first American to enter and be selected in an NBA draft directly after graduation from high school since the league implemented the age restriction rules in 2005. He has garnered a significant following on his antsimons Instagram account for his basketball-related posts.

He was born and raised in Altamonte Springs, Florida. He began dating Bre Hudson.

He was the third high school player since 2015 to be drafted in the NBA behind Thon Maker.

Anfernee Simons Is A Member Of