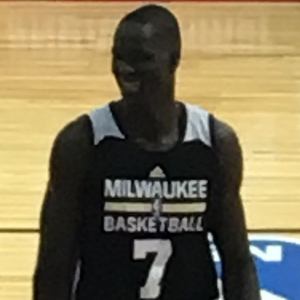 7'1" Australian-Sudanese center who was named a five star recruit by Rivals.com as a member of the high school class of 2015. He was selected 10th overall in the 2016 NBA Draft by the Milwaukee Bucks.

He first began playing soccer competitively in Australia, then took up basketball at the age of 14, moving to the United States as a high school freshman.

He played high school basketball at both Carlisle School and Orangeville Prep.

His parents are descendants from the Dinka People. He has siblings named Ajak, Matur and Maker.

He and fellow big man Skal Labissiere became two of the top recruits in the 2015 high school class.

Thon Maker Is A Member Of