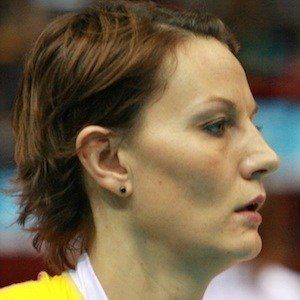 German volleyball player who was named German Volleyball Player of the Year in nine consecutive years from 2000 to 2008. She is a multiple-time Olympian and has won many of volleyball's most prestigious tournaments, including the Italian Cup and CEV Cup.

She grew up in Koln, Germany and began her career as a member of the youth squad at VC Essen Borbeck in 1990.

She won the Best Server award at the 2012 FIVB Women's Club World Championships.

She married Stefan Hubner, with whom she has a child.

She and Jenny Barazza have both played professionally for the club Foppapedretti Bergamo.

Angelina Grun Is A Member Of