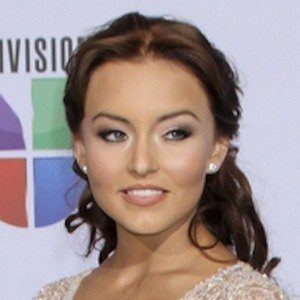 French-Mexican actress who became popular for her roles in the Mexican telenovelas Rebelde, Muchachitas Como Tú, and Corazón Salvaje. She also starred in Abismo de Pasión and Amar a muerte.

She was part of a band Rabanitos Verdes (Little Green Radishes), which inspired her acting dreams.

In a break from her usually wholesome roles, she played a killer in the television drama Mujeres Asesinas 2.

Her mother was born in Mexico to French parents, and moved the family back to Mexico when Angelique was two years old. From 2011 to 2014, she was in a relationship with Jose Alberto Castro. She later began dating Sebastian Rulli.

Dulce Maria co-starred with her on the telenovela Rebelde.