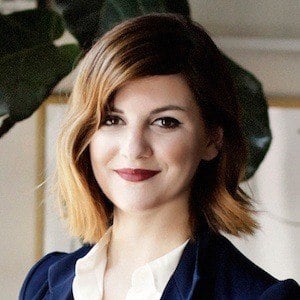 Illustrator who is known for her work in watercolor and pen and ink drawings often of a variety of subjects including flowers, still life's, and exterior settings. She is also known as the co-founder and creative director of Rifle Paper Co.

With a passion for art at a young age, she began posting her illustration work to Instagram and quickly gained a larger following. Then in September of 2014, she began posting work to her business page, expanding her career and her company.

Her art has allowed her to travel to a variety of different places including Paris, the Adirondack Mountains, and London. She often posts pictures of her travels on her personal Instagram account.

She married Nathan Bond who is also a co-founder of Rifle Paper Co. Together they have a son named Ford.

As an illustrator who primarily focuses on books, print, and other media, she can be seen in relation to other artists in the field including Maurice Sendak, NC Wyeth, and Beatrix Potter.

Anna Bond Is A Member Of