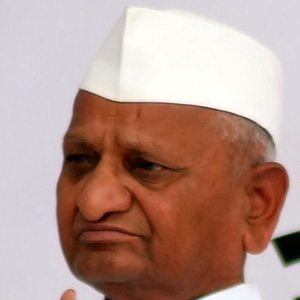 Social activist who advocated against corruption, and promoted the development of rural India and government accountability. He was given the Padma Bhushan, which is the third-highest civilian award in India, by his Government in 1992.

He was unable to receive higher than a seventh grade education and started selling flowers at the railway, which resulted in him owning two flower shops.

He started a hunger strike to put stress on the Indian government to enact the Lokpal Bill, and anti-corruption law, in 2011.

He was the child of Laxmibai Hazare and Baburao Hazare and is unmarried.

He was greatly influenced by the work of Mahatma Gandhi.

Anna Hazare Is A Member Of