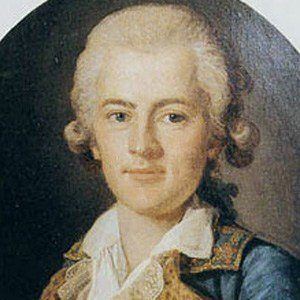 Former Ballet Master of the Royal Danish Ballet. He is also remembered for his performances with the Royal Swedish Ballet.

At age nine, he began studying ballet with dance teacher Noverre. Soon thereafter, he performed in Austria, France, and England.

Royals loved to watch him dance. Gustav III of Sweden, in fact, once demanded that Bournonville untie his hair so he could watch his locks flow in the wind as he twirled on stage.

His sister, Julie Alix de la Fay, also had a career as a dancer. While married to dancer Mariane Jenssen, he fathered a son -- choreographer August Bournonville -- with his maid, Lovisa Sundberg.

He and Eliot Field became known as two of the best dancers of their respective generations.

Antoine Bournonville Is A Member Of