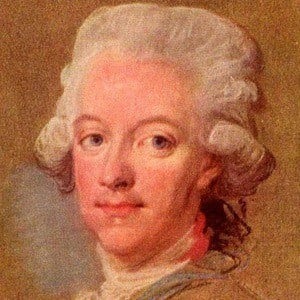 King of Sweden from 1771 to 1792 who fought against the nobles of his country and against his neighboring states. He enacted several sweeping social reforms including the abolition of torture and the legalization of Catholicism and Judaism in Sweden.

He ended the Age of Liberty, a period of parliamentary governance and increasing civil rights, when he seized power from the government in 1772.

He took away freedoms enjoyed by nobles under his predecessor's reign, believing that an enlightened king could rule the country better than them.

He was a distant relation of Russian ruler Catherine the Great, which helped him to secure Russia's cooperation while attempting to conquer Norway.

Raoul Wallenberg is another well-known Swedish statesman; he didn't run a country but he did save many lives from the Holocaust.

Gustav III Is A Member Of