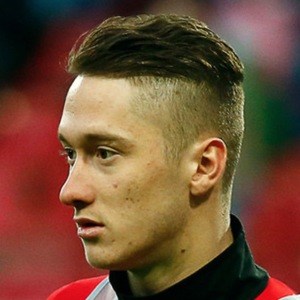 Russian soccer player who's known for playing centre and attacking midfielder for Lokomotiv Moscow. He also played for Levadia Tallinn and the Russian national team.

He started his career by joining Olymp Slavyansk-na-Kubani's youth setup in 2008.

He made his debut for the Russian national team in a friendly game against South Korea in October 2017.

His twin brother Aleksei is also a soccer player.

He played alongside Aleksandr Samedov for Lokomotiv Moscow.

Anton Miranchuk Is A Member Of