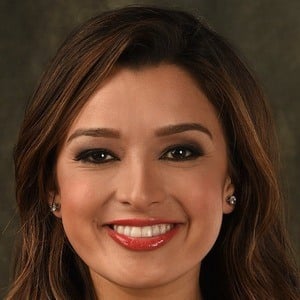 Bilingual sports reporter known for her work at ESPN. She'd previously spent time with Univision covering the Dallas Cowboys, Dallas Stars, and FC Dallas Stars, as well as the NBA and MLB playoffs.

She studied communications at the University of Mount Union and entered the sports industry as a production assistant at various TV and radio stations in Florida.

She was a talented youth soccer player and spent two years with the U19 Mexican national team.

Her mother is award-winning journalist and author Maria Antonieta Collins.

She has a dog named Nolan, who she named after Hall of Fame pitcher Nolan Ryan.

Antonietta Collins Is A Member Of