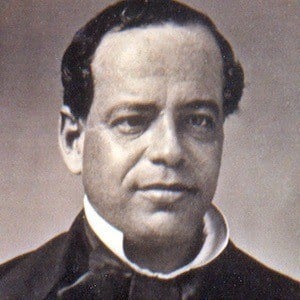 This nineteenth-century political and military leader served eleven terms as President of Mexico, first taking office in May of 1833 and ending his dictatorship in August of 1855.

He joined the Colonial Spanish Army at the age of sixteen. Several years later, he transferred his allegiance to the opposing Mexican revolutionary forces.

His years in power were marked by political and military strife, and though he succeeded in rebuilding the Mexican army time and time again, he was responsible for losing territory for his native country during the Texas Revolution and the Mexican Cession. Toward the end of his life, he was put on trial on charges of widespread political corruption and treason.

The son of Spanish colonists, he grew up in Veracruz, Nueva España (New Spain, or Mexico). His first marriage, to Inés García, resulted in children named Maria del Carmen, Guadalupe, Antonio, and Manuel.

He was exiled from Mexico for a time but was temporarily allowed to return to his native country following an 1837 meeting with American president Andrew Jackson.

Antonio López de Santa Anna Is A Member Of