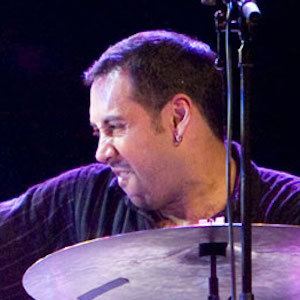 Mexican-American Jazz drummer who is best known for composing the original score for the 2014 film Birdman which was nominated for a Golden Globe.

He first began playing drums at the age of five and by his teens he had already begun playing professionally. He attained a degree in classical piano from the National Conservatory in 1993 and then moved to Boston, Massachusetts, to study at Berklee College of Music. After he graduated in Jazz Studies, he attended Boston's New England Conservatory of Music where he received a Masters in Jazz Improvisation.

He has won several awards for his original score in the Alejandro Gonzalez Inarritu film including the Critics' Choice Movie Award for Best Score and the Satellite Award for Best Original Score.

He was born and raised in Mexico City, Mexico. He is the grandson of Ignacio Lopez Tarso.

He was taught by Danilo Perez at the Conservatory in 1997. He later became the drummer for Pat Metheny's band on tour.

Antonio Sánchez Is A Member Of