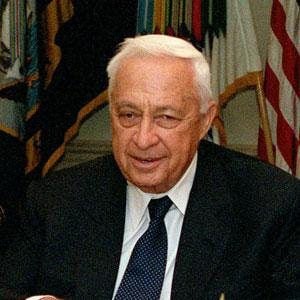 11th Prime Minister of Israel who held office from 2001 until 2006, when he had a stroke which put him in a vegetative state. He was considered a brilliant military strategist who led Israel to victories in the Six Day War and the Yom Kippur War.

He joined the youth military groups Gadna and Haganah.

He was removed as the Minister of Defense after his involvement in the massacre of Palestinian civilians by Lebanese militias during the 1982 Lebanon War came to light.

He was married twice, and his first marriage to Margalit Sharon ended with her death in 1962.

Ariel Sharon Is A Member Of