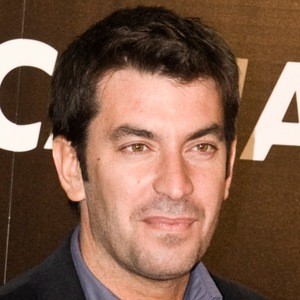 TV host, actor, and comedian who is known for his work across Spain's television industry. He has provided the Spanish language dubbing for a number of Hollywood animated films, including Madagascar, Madagascar: Escape 2 Africa, and Bee Movie. In 2011, he began hosting the game show ¡Ahora Caigo!

He studied at San Vincente Ferrer, and eventually left when he was offered his first job in journalism in his hometown of Valencia. He made his TV debut in 1998 as a reporter for the Spanish TV series Harder They Come.

In 2012, he won his first Neox Fan Award for Best TV Presenter/Host. In 2015, he co-starred in the Spanish comedy film Rey Gitano.

In the Spanish-language dubbing of Madagascar, he voiced the character of Kowalski, who was originally voiced by Chris Miller.

Arturo Valls Is A Member Of