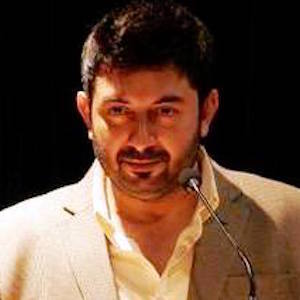 A Bollywood actor known as a heartthrob all throughout the 1990s, he left the field of acting and Bollywood behind for 12 years until his comeback with Kadal in 2013. He is best known for his leading roles in the 1992 political drama Roja and the 1995 film Bombay.

He studied business at Loyola College, Chennai and graduated in 1990. At Loyola College, he worked as a model for pocket money and joined his first theatre society, which is when he became interested in acting. His film acting debut was made in the 1991 action drama Thalapathi.

He quit acting because he felt he was too young to deal with the level of stardom that he was exposed to. He quit to pursue other things and never thought of making a comeback. When he took a hard fall and almost became paralyzed, his family and friends urged him to become more active and run in marathons. That gave him a new thirst for life and pushed him to consider acting again.

He was born in Chennai, Tamil Nadu, to V.D. Swamy, an industrialist, and the Bharatanatyam dancer Vasantha Swamy. In 1994 he married Gayathri Ramamurthy. Their daughter was born in 1996 and their son in 2000. They separated in 2003 and finally divorced in 2010. In 2012, he married lawyer Aparna Mukerjee.

He and Jayam Ravi appear in the 2015 thriller Thani Oruvan together.

Arvind Swamy Is A Member Of