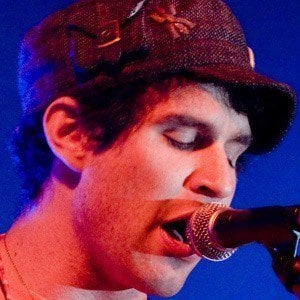 Singer, songwriter and multi-instrumentalist who is one of the founding members of the psychedelic rock group Animal Collective. He has also recorded with such side groups as the Terrestrial Tones and Avey Tare's Slasher Flicks.

He met his Animal Collective co-founders -- Noah Lennox ("Panda Bear"), Josh Dibb ("Deakin"), and Brian Weitz ("Geologist") -- while they were all attending high school in Baltimore, Maryland. His group released its first album, Spirit They're Gone, Spirit They've Vanished, in 2000.

While attending New York University, he remained an active member of Animal Collective. He and his bandmates later made Los Angeles their home base.

Born David Michael Portner, he grew up with a sister, Abby, who also pursued a career as an experimental artist and musician. He was briefly married to Icelandic musician Kria Brekkan.

He and Panda Bear turned Animal Collective into an underground hit in the indie music scene.

Avey Tare Is A Member Of