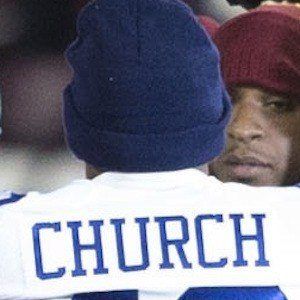 Undrafted safety in 2010 worked his way to a starting role with the Dallas Cowboys during the 2013 season. He recorded the most tackles by an NFL defensive back that year.

He was a wide receiver, safety and triple-jump track star at Penn Hills High School before being recruited by The University of Toledo.

His dominating performance at Toledo led to four consecutive First-team All-MAC selections from 2006 to 2009.

He has a sister named Brandi. His parents names are Barry Sr. and Denise. In 2015, he married Marcia Ann Thomas.

He became on of the fixtures of the Dallas Cowboys defense in 2013, much like veteran linebacker Demarcus Ware.

Barry Church Is A Member Of