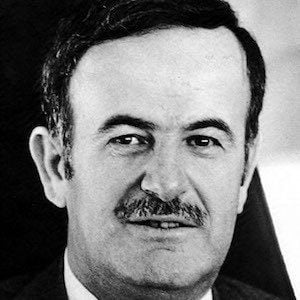 He was involved in the 1963 Syrian coup which brought the Ba'ath party to power and a second coup in 1966 during which he was named Defense Minister.

He did much work toward deradicalizing the Ba'ath party when he took power by easing restrictions on civilians and encouraging growth in the private sector.

His brother, Rifaat al-Assad, tried to seize power from him and was exiled. His eldest son was killed in a car accident in 1994, and he had three other children.

His second eldest son, Bashar al-Assad, took over the presidency of Syria after his death in 2000, and has had a controversial tenure.

Hafez al-Assad Is A Member Of