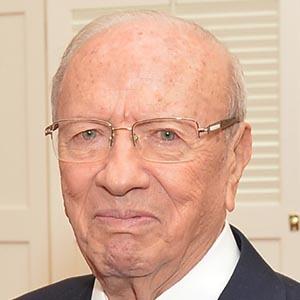 Lawyer and politician who was elected the President of Tunisia in 2014, becoming the first freely elected President following the Tunisian revolution. He also served as Prime Minister from February 2011 to December 2011.

He studied law in Paris and passed the Tunis bar in 1952.

In 2015 he was awarded an honorary degree from Paris-Sorbonne University.

He and his wife Chadlia Saïda Farhat had two sons, Mohamed Hafedh and Khélil, and two daughters, Amel and Salwa.

He moved into politics when he became an advisor to Habib Bourguiba in 1956.

Beji Essebsi Is A Member Of