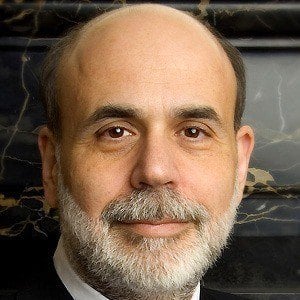 14th Chairperson of the Federal Reserve. He replaced Alan Greenspan in 2006 as one of the foremost economic leaders of the United States. His controversial handling of the financial crisis of 2008 caused him to step down from his position in 2014.

He was a professor of economics at Princeton University and then headed the Board of Governors of the Federal Reserve System.

As an expert on the Great Depression, he believed that the economic woes of the 1930s and '40s stemmed from a tightening of the money supply. This belief influenced his decision to release more money into the economy during the early 21st-century economic crisis.

He was born in Augusta, Georgia and raised in South Carolina by a pharmacist father and a teacher mother.

He subscribed to Milton Friedman's model of economics.

Ben Bernanke Is A Member Of