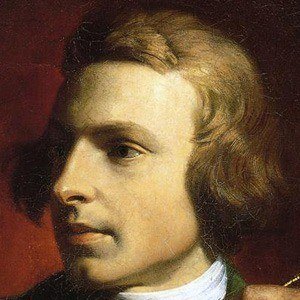 Anglo-American painter who specialized in portraits and historical scenes, including "Angelica and Medora," "Cymon and Iphigenia," and a portrait of the revered General Monckton.

He learned how to make paint by watching Native Americans mix riverbank clay with bear grease.

He had a wealthy benefactor and was able to study abroad. He traveled to Italy, where he learned to paint in the style of Titian and Raphael, as well as in the neo-classical mode of Gavin Hamilton and Anton Rafael Mengs.

He was the tenth child of an innkeeper. His father became the proprietor of the Square Tavern after the family relocated to Newtown Square, Pennsylvania. He and Elizabeth Shewell were wed at St. Martin-in-the-Fields in 1765.

Benjamin West Is A Member Of