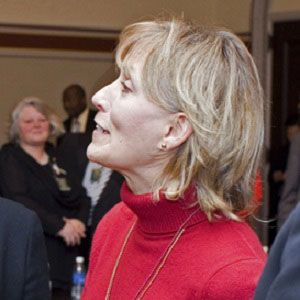 Remembered for her role in bringing about the 9/11 Commission, this widow of September 11 terrorist attacks victim Sean Rooney worked with other victims' families to establish a World Trade Center memorial and to improve national security.

After graduating from the Buffalo Academy of the Sacred Heart, she earned an art degree from Buffalo State College.

Tragically, she died in the 2009 crash of Colgan Air Flight 3407 while traveling to a memorial birthday celebration for her late husband. After her death, her sister Margaux filed a lawsuit against Colgan and several affiliated airlines.

Her marriage to Sean Rooney lasted from 1980 until Rooney's death in 2001. The couple, both natives of Buffalo, New York, were living in Stamford, Connecticut at the time of the terrorist attacks.

Eckert's husband and insurance executive Kevin Cosgrove both died in the World Trade Center's South Tower on the morning of the 9/11 terrorist attacks.

Beverly Eckert Is A Member Of