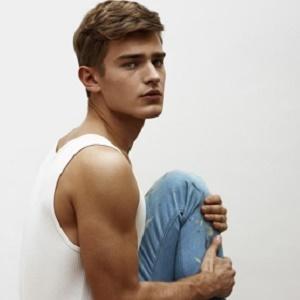 Runway and editorial model who has appearances in Electric Youth with Bruno Staub, Dansk with Thomas Lohr and Numero Homme with Jean Baptiste Mondino.

He was scouted at a funfair in Stockholm and began modeling while still in school. He was 17 years old when he landed a D-Squared campaign that was shot by Mert Alas and Marcus Piggott.

On the catwalk, he has sported attire by Mugler, D Squared, Burberry, John Galliano, Philip Lim 3.1, Armani and Moncler Gamme Rouge, amongst others.

He was born in Gustavsberg, Sweden.

He has fronted campaigns for River Island, H&M, Hugo Boss, D-Squared and Armani.

Bo Develius Is A Member Of