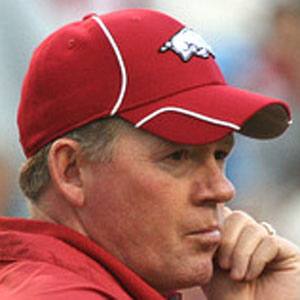 College football head coach who was fired from Arkansas in 2011 for not disclosing a scandalous relationship with a female employee.

He played college quarterback for the Carroll Fighting Saints football team between 1980 to 1982.

He has also had professional coaching positions with the Atlanta Falcons.

He has two sons named Nick and Bobby Jr., and two daughters named Kelsey and Katie.

He was head coach for the Atlanta Falcons in 2007 after Michael Vick was forced to leave the team.

Bobby Petrino Is A Member Of