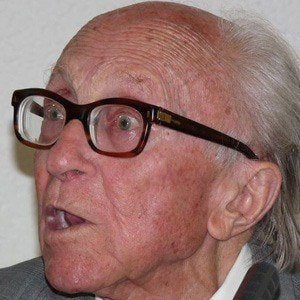 Notable Slovene writer best known for his autobiographical novel, Necropolis, which is narrated by a survivor of the Nazi concentration camps. Pahor received the prestigious Preseren Award in 1992. The French Government awarded him the Legion of Honour.

Before becoming a prisoner at the infamous Dachau and Bergen-Belsen concentration camps, he studied Italian literature at the University of Padua.

An opponent of Communism, he was a member of the Slovene Democratic Opposition. In September of 2019, he was the oldest living survivor of the Holocaust.

He was born in Trieste, Austria-Hungary (present-day Italy). He later married Radoslava Premrl.

He and Ivan Cankar were both poets and activists who were involved with Slovene politics.

Boris Pahor Is A Member Of