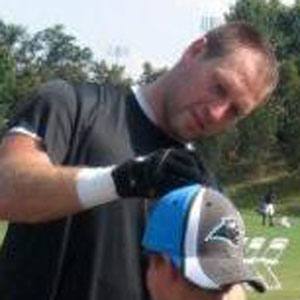 Full back who played for the Carolina Panthers from 2000 to 2009. He broke into the NFL after going undrafted.

He was named the Central Carolina Conference Player of the Year his senior season at Ledford Senior High School.

He was inducted into the Western Carolina University Athletics Hall of Fame after having two 1,000 yard rushing seasons.

He and his siblings were raised in Thomasville, North Carolina.

He was teammates with Steve Smith on the Carolina Panthers from 2001 to 2009.

Brad Hoover Is A Member Of