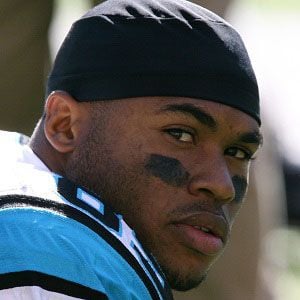 Scrappy, hot-tempered wide receiver who was a five-time Pro Bowl selection with the Carolina Panthers before joining the Baltimore Ravens in 2014. He helped lead the Panthers to the Super Bowl in 2004, where they were defeated by the New England Patriots.

He set records in football and track & field at University High School in California. He played college football at Santa Monica College and the University of Utah.

He had one of his best seasons in 2005, when he led the NFL in receptions, touchdowns and receiving yards.

He has four children - Steve Jr., Peyton, Boston, and Baylee - with his wife Angie Smith.

He was joined by quarterback Cam Newton on the Panthers in 2011.

Steve Smith Is A Member Of